Sarah Rees Brennan introduces us to two brothers with a unique and hilarious relationship. But this isn't a story about hugging after the day is over. This book is about kicking butt with big weapons.

In The Demon's Lexicon brothers Nick and Alan have to fight evil magicians to protect their family, especially there emtionally and often mentally abscent mother. Years before their father died trying to do the same.


This urban fantasy novel was interesting and funny. The storyline was different from what I normally read. But if I am going to read fantasy, I want it to be urban fantsy because it is in a world I can understand.

Nick is a British bad boy that Chelsea wishes she could date. He makes Patch look like a toddler. And looks at his lips on the cover, aren't they just begging to be kissed?

The first 40 pages of The Demon's Lexicon had me laughing out loud and sitting on the edge of my seat. But after that, it kind of started lagging. The end definitely had me about to fall of the couch again and redeemed the middle. This book has mass appeal with strong male character, lots of action, unique details, and a hint of romance. 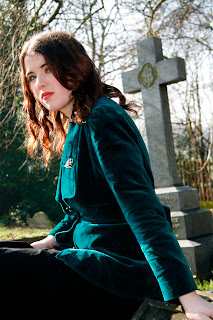 Q: Where did you first get the idea for The Demon’s Lexicon?
A: My father waswatching a documentary on the Discovery Channel and my head snapped up and I said ‘Now that’s interesting.’ (I can’t tell you what was interesting, it would spoil the book!) But let it be a lesson to us all to let our parents watch boring television. You know. Sometimes.
In Nina Lourie's review of The Demon's Lexicon for Tor.com
(you need to check it out, it's excellent!) she says,

I got hooked onSarah Rees Brennan’s blog when friends who were into the Harry Potter fandom recommended it to me. This is what I learned from her wonderful “stumbling towards publication” posts:

Step 1. Have crazy adventures throughout England and Ireland.

Step 3. Gather a group of amazing YA fantasy authors together in an Irish castle and frolic.

The Demon's Lexicon is a fun read from a fun and interesting author!

Have you reviewed this book? Let me know.