Dystopian February is great because it enriches my love of reading other people's takes on dystopian books. As always I would like to express my appreciation to Lenore for coming up with the idea in the first place! Her posts and those who have shared their posts on her blog make it fun to see what everyone is reading and reviewing for dystopian fiction.


Today I am honored to have Joanne Renaud visiting on the blog for a review of an adult dystopian novel she recently read. I think Joanne definitely has a unique (and honest) view on what she reads. For another example of this you can check out her review of The Hunger Games. Thank you Joanne for sharing your thoughts with me and the rest of my readers! 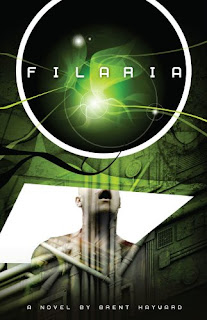 I picked up "Filaria" by Brent Hayward as part of ChiZine's Friday the 13th giveaway. The book stood out to me because I was in the mood for a science fiction dystopia, as it seems that many young adult dystopias these days are, more or less, Sweet Valley High novels with vaguely oppressive governments. I wanted something gritty, dark and adult, and "Filaria" seemed to fit the bill.


It started out well enough. It was confusing at first, but once I persevered, I got a pretty good idea of how the world worked. I really liked the world-building. It was bizarre as hell, but the weirdness was written in a way that creeps over you like a fungus… I was down with that.

"Filaria" is set in this massive underground habitat/resort in the distant future, when the sun has dimmed and gone red.  The habitat is tiered, with the wealthy plantation owners living on the top tier underneath the artificial suns; in the basement, the descendants of the "Public Works" sector live amidst flying rats and radioactive waste. There's also the reservoir level, with its polluted lakes and Hoffmann City, with its famous red light district; and connecting everything are the lifts (pods) which seemingly operate by organic technology.

Instead of hero or a heroine going on a quest, "Filaria" tells four stories with interconnecting characters… rather like a Robert Altman movie IN THE FUTURE!  You have Phister, a hairless, toothless young man from the basement trying to find his ex-girlfriend and getting hopelessly lost; there's Deidre, the pampered daughter of the top-level "Orchard Keeper" forced into exile; Mereziah, an elderly lift attendant who decides to finally leave the station he's been faithfully keeping for almost a century; and Tran so Pheng, a reservoir level fisherman who goes out searching for a cure for his beloved wife who is dying of the Red Plague. But, as all these characters find out over the course of the novel, some mysterious thing has breached the artificial sky, and the world is now breaking down.  Sounds good, right?

It was, for the most part. The writing was, if elliptical at times, compelling and descriptive, with a big emphasis on emotion that was almost operatic. The characters were well-drawn-- from earnest basement urchin Phister and brainy but clueless rich girl Deidre to ancient, prim Mereziah and bedraggled Tran So Pheng, intent on his quest to find a cure, or at the very least, answers-- and the pacing was kept at a brisk pace. I was really enjoying it until-- it all of a sudden ended. It practically ended mid-sentence, since the end resolved nothing. And I mean NOTHING. It was, seriously, like getting into a TV show and having it cancelled mid-season.

I half wonder if the author just got tired of writing and stopped, as all four plots end mid-step. Deidre is kidnapped and taken outside the habitat (by whom?) and is told that she might be the savior "of the species." Phister is implanted with the personality of a big important dead guy-- on yeah, and he also might be a savior, but we leave him as he's wandering off in the hopes of waking up more dead people (although we are not told any more that that). Tran so Pheng is still looking for his wife, and Mereziah, after meeting Deidre's dad, goes into a light. Is it THE light? Who the hell knows? 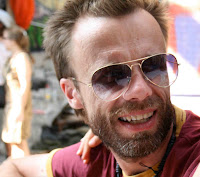 I wouldn't mind this so much if this was the first half of a two part book, but there's no signs of being any kind of a sequel, and the author apparently-- according this Livejournal entry-- prides himself on his lack of resolution. I'm not sure why. The ending is often the trickiest thing to write in a book-- nail it, and you can make a mediocre novel truly memorable; flub it, and you can wreck a truly good story. This felt like the worse kind of cop-out-- even worse than "and then I woke up" or "and then the aliens came." It was incredibly unsatisfying. If "Filaria" had a decent ending, I would have written a glowing review and declared it one of the best dystopian novels I'd read recently. But as it is, I can't recommend it.

This is really unfortunate, because the story was fun and the world-building is incredibly well done, but I really hate the idea of investing days in reading a book and it ending like a cancelled TV show. This felt far more like a half-finished draft than a complete novel. ChiZine looks like a great publishing house-- the design and packaging of "Filaria" looks like a million dollars-- and I'm happy they sent this to me for a promotion. But I'm afraid I'll have to pass on reading any more of Brent Hayward's books in the future. 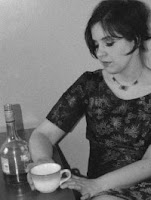 Joanne Renaud, who earned a BFA in illustration from Art Center College of Design, has been writing, drawing and painting as long as she can remember. She currently works as both an author and a freelance illustrator. Her novel, A Question of Time, is due for release in November 2012 from Champagne Books.